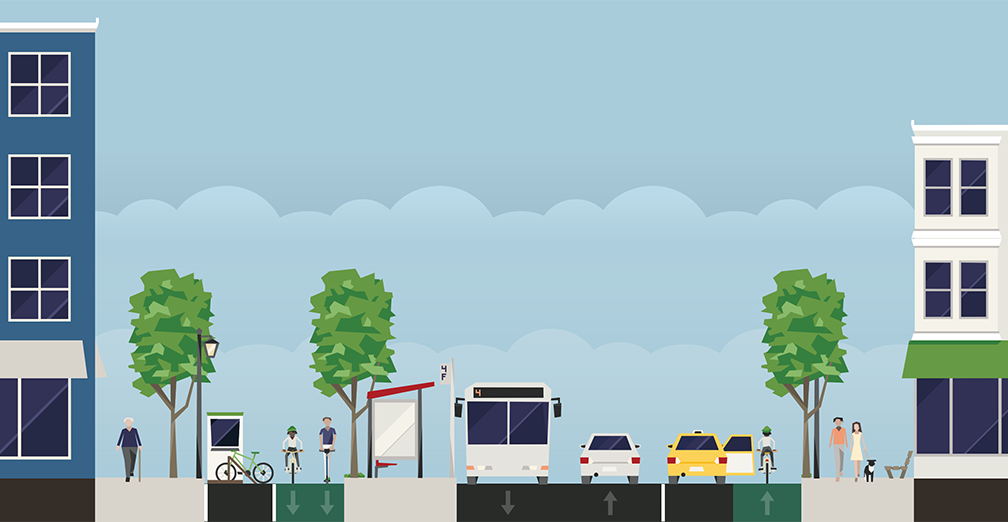 I haven’t really written a “team update” thing for Streetmix since 2013. There’s no way I can catch everyone up on everything that’s happened (plus I forget who I mention things to) but let’s just start with this: everyone has seen Streetmix Live! in Edmonton, right? Max Amerongen, chair of Media Architecture Design Edmonton (MADE) wrote in last week:

“Despite a bit of wind, we had a great response. Almost everyone who interacted with our pieces had some sort of epiphany about street design. People were shocked at how much space cars take up, and tended to put barriers between cars and people. Even more importantly, it let people express their opinions. People who weren’t cyclists put bike lanes in, everyone minimized the number of traffic lanes and some people removed cars entirely. Suddenly, people felt empowered to decide what their city should look like!”

A lot of the behind the scenes stuff I’m doing with Streetmix over the past few years has been largely geared toward figuring out how to support the thing when no one’s working on it full time. Some of it is in the code and the infrastructure behind it, and some of it is pulling together the community and funding.

On the code side: we’ve recently ported all of the front-end JavaScript into ES6 modules. What does this mean? Essentially, the goal is to have smaller, contained units of functionality, which makes it a lot easier for different people to contribute fixes and improvements to a smaller scope of the code, rather than having to be aware of the entire thing at once. We have a developer from Poland who has started contributing toward this effort recently, so if you see Tomasz around, say hello.

On the community side: this is where we’re going to see some noticeable differences on the client side of Streetmix for the first time since 2013. This affects members of the original team – namely, it affects where your name is on the application! As we add new contributors, and as Streetmix itself starts to evolve, some of the information on the About panel (and on the GitHub repo’s README) is going to change. (In fact it’s already outdated.) In addition, in the last couple of years, we’ve been amassing a number of contributors around the world who’ve translated Streetmix into their native languages, even though the application itself doesn’t fully support localization yet. I’d like to make localization a priority so that this work doesn’t remain in limbo. But keeping a list of contributors’ roles up to date in various languages isn’t feasible in the long run, so we should extract that out of the application. So where would we put names? I’ll come back to this in the “funding” section next.

The other thing I’d like to focus on for community is to bring other Streetmix users and fans together. Right now, all communication is centralized: it goes to our e-mail, and sometimes to our Twitter account, both of which I read, but I don’t have time to respond to everyone. And having tight, centralized control over our communications is inefficient, because it’s just me, and because there’s a lot of people who could benefit from learning from each other based on what they’ve already done with Streetmix. And I’ve heard from enough of these users to know that we can and should place a lot of faith in their ability be a support group and network for one another. So, as an experiment, I started a Slack channel earlier this year and invited a number of people to it, but kept it private. It’s been relatively quiet, but I’ve seen a number of other communities and organizations open up their Slack effortlessly, so last week, I opened it up to anyone who wants to join: https://streetmix-slack.herokuapp.com/

Slack, though, is a specific type of communication, and not everyone wants to sit in (yet another) chat room all the time. We do need to have an asynchronous communication alternative. So my current experiment is to spin up Discourse, which is open source forum software that Code for America, Beta NYC, and many other communities use. The installation process is not hard, so there’s a very vanilla-shell version of this up here: http://forums.streetmix.net/ I’d love to get some feedback on this while it’s still in its very early stages. Eventually, I’d like to remove the feedback form from the site entirely. I think it’s served its purpose, and we can still mine three year’s worth of emails for feedback. At this point, having public threads people can comment on and refer to is going to be much more effective than emails that land into an inbox black hole. And in the future, when we need to learn from our users, we should be able to interview them and have a conversation about their needs directly.

In the last few years, the options available for funding and supporting open-source software has diversified tremendously. There are companies now developing entirely open-source software (I work for one, for example) which didn’t even seem like an option in 2013: many civic startups at the time, as you might remember, closed their source code when they took VC funding. And no one was quite certain whether it would be feasible to run Streetmix on donations or bug bounties. There’s a really good overview by Nadia Eghbal that’s worth referring to: https://github.com/nayafia/lemonade-stand, and I’m paying attention to organizations like Nylas or Sentry that develop in the open but sell a professional tier product. And if we take in the comments that have landed in our black hole of an inbox, we can essentially prove that the demand for Streetmix Pro exists. (How much they are willing to pay for it is the next question.)

For the moment, I’ve been talking to OpenCollective, which is a VC-backed company that acts as a broker for open-source projects that need funding, and need to disburse payments to contributors, but want to do so without the hassle of forming its own legal entity to hold money (like a company, or a 501©(3)). A bunch of open source projects have on-boarded (there’s a full list here: https://opencollective.com/opensource) and I’ve been working with Pia and Aseem, two of the co-founders, to get our own page up: http://opencollective.com/streetmix/ We haven’t talked about it publicly yet (though it’s up, and live), and since this essentially acts as an “about” page, it’s where we can have our team list, replacing the original about dialog box. One thing I’d like to hear from all of you is how to communicate this new funding mechanism appropriately. And I’d like to get a combination of small donations from individuals along with larger sponsorships from companies or grant-making foundations.

There’s some amount of flexibility here: I can’t know when “Streetmix Pro” is a real thing given our current set of resources, and it can take some time to get there. What I do know is that it can’t happen if it depends solely on volunteer time. For well known open-source technology projects, the benefit of spending some engineers’ time on it is because those engineers depend on those projects for their real jobs, so time spent is not a cost, it’s an investment. Streetmix is very different: it’s not a tech infrastructure project; most users can’t contribute technically; and lastly, the strength of Streetmix as a product is in its design and experience, which needs skillsets that are not often volunteered in open source as much as programming is. So we need to be able to have something in a bank where we can pay certain people for their talents but outsource the overhead of doing so. And what we pay for should augment the work of whoever is volunteering their time on Streetmix. OpenCollective, so far, seems to be a good answer for this.

Alright, that was a lot of text. I was hoping to keep it short, but that’s hard! At this point, I’d love to take questions and particularly hear any concerns or comments you might have. Feel free to respond to the entire group (the e-mail list consists of the original CfA team + recent contributors) or message me privately.